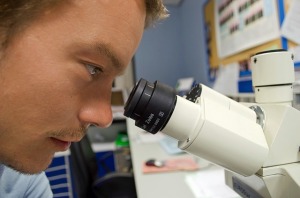 A British team of scientists have found a way to halt the death of brain cells in mice. This could represent a breakthrough in the treatment of neurological diseases.

The team induced (created) a neurodegenerative disease in the mice. A drug-like compound was injected into the stomach of a group of mice. According to the study, “the mice who were treated remained free of symptoms like memory loss, impaired reflexes, and limb dragging five weeks later. The treated mice also lived longer than the untreated mice.” *These mice did have side effects, such as weight loss and increased sugar levels.

It is good to know that while we play and sleep, there are others working diligently to find better treatments for Alzheimer’s and other diseases like Parkinson’s.

This entry was posted on October 10, 2013, 8:57 pm and is filed under Health, Senior Older Adult and Elderly, Technology. You can follow any responses to this entry through RSS 2.0. You can leave a response, or trackback from your own site.